Home Good News Boy With Special Needs Celebrates Getting Kite Off The Ground For First... 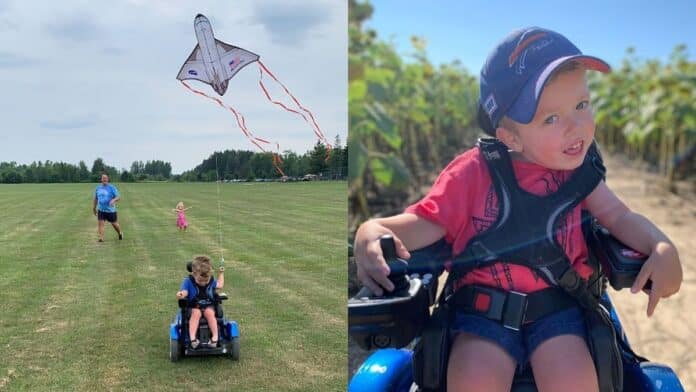 A family has shared the wholesome moment their son with special needs, who loves the book “Go Fly A Kite, Charlie Brown”, was able to use his wheelchair to fly his own kite for the first time.

In the uplifting footage, three-year-old James Parisi can be heard joyously saying, “I’m doing it,” as he holds on to his space-shuttle-themed kite as it floats in the air behind him.

The moment took place on August 7, at Krull Park, Olcott, New York, and initially, James struggled to get the kite off the ground, trying time and again to get it airborne.

James was diagnosed with a rare form of Congenital Muscular Dystrophy when he was five months old.

He lacks a certain protein that would normally ensure that his muscles bind to his skeletal system, and because of this, he has profound muscle weakness and overall low to no muscle tone.

Despite his condition, though, James has never held back in trying activities that other children enjoy.

He really likes Charlie Brown, his dad, Anthony Parisi, 36, said, and after watching “A Peanuts Movie” and reading the book “Go Fly A Kite, Charlie Brown” James wanted to try kite-flying himself.

James’ grandparents – who can be seen helping him in the video – purchased their grandson a kite, and the family picked a perfect day to head outside, with the sun shining and the wind swirling.

Initially, James struggled to get the kite off the ground, but he kept trying in the hope that it would eventually rise.

Then, as the kite took off, James’ identical twin sisters, Caroline and Lucy, aged two, chased the space shuttle through the field as their older brother drove his wheelchair forwards, amazed at what was happening.

Speaking of the moment, Anthony, from Buffalo, New York, said: “It took some time for him to get the kite off the ground, but eventually he did and it produced one of the most incredible moments I’ll ever experience.

“It’s hard to describe just how amazing the experience was and how it made me feel.

“Initially it made me smile, laugh and cry, but after having some time to process it all, and knowing what that meant to James, it made me incredibly proud and reminded me of just how special James is and how lucky my family is to have him in our lives.

“One thing I want people to take from this story is to cherish every moment of every day, especially time spent with our loved ones.

“I also want people to understand that James is a typical three-, almost four-, year-old boy.

“He loves animals, reading books, playing on playgrounds and with his sisters.

“He loves Spider Man, sports and cartoons. He just needs a little help moving around.”