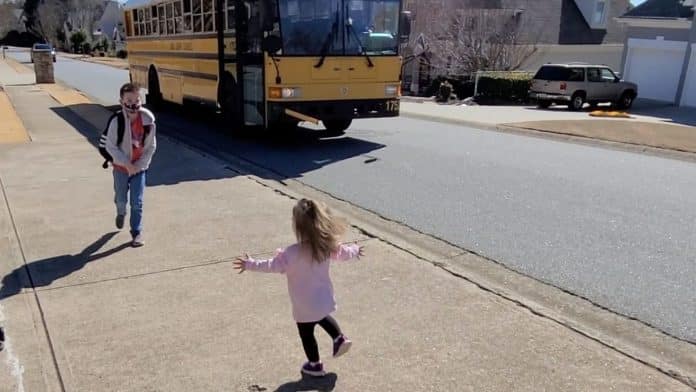 A toddler’s adorable daily routine of patiently waiting before running to hug her big brother as he arrives home on the school bus has gone viral.

Anna Martin, aged two, was missing brother John, five, after he started kindergarten this year so mom Cory, 33, decided to take her outside to greet John off the bus which the tot loved.

Having seen her daughter’s reaction the first time, Cory, from Marietta, Georgia, started recording the welcome-home greetings as they became a daily tradition for Anna and John.

Each day the family asks Anna if she’s ready to meet John, and she screams “YES!” in reply.

At the bus stop, Anna then waits anxiously, standing and looking for the big yellow bus to come around the corner and up the street before running to hug John and wave the bus off.

Cory later shared a selection of clips online where millions of people around the world have viewed and loved the sweet sibling moment.

She said: “We couldn’t believe how much of a response our videos received – we’ve had a lot of sweet messages and positivity.

“No matter what is going on in the world or around you, spread positivity and love.”