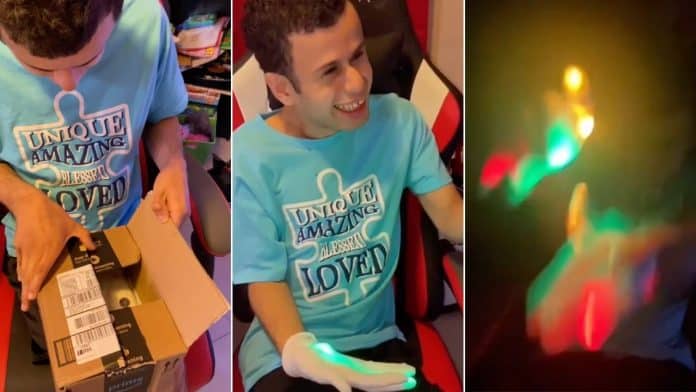 A boy with autism who enjoys sensory stimulation excitedly tries on a pair of light-up gloves sent from one of his social media followers on the other side of the world.

Laura Santiago, from Miami, Florida, set up a TikTok page documenting her son Adrian Estevez’s activities and to spread awareness of his condition.

Through their posts Adrian, 19, quickly built up a following of thousands of people and seeing how he enjoys and uses sensory stimulation to calm down people starting offering cute gifts.

Laura, 39, often records Adrian’s reactions to receiving the surprises and on March 18 a package arrived containing a pair of light-up gloves he had been hoping for.

READ MORE: Emotional Moment Man With Down Syndrome Reads Card Asking Him To Be Groomsman

As Laura handed the package to him, his face immediately lit up, and his joy was clear to see as he discovered what was inside.

The gloves were sent by Wendy Riddoch, a follower of Adrian and Laura from Australia.

Laura also included a video of Adrian wearing his gloves in her TikTok post, and since then the teenager has continued to have fun wearing them, she added.

The family also has a website, Adrian Autism World, through which they share information about Adrian’s condition and hope to raise awareness of severe autism.

Laura said: “Seeing him surprised, laughing and smiling filled our hearts with joy.

“Words can’t really describe how happy we were, and I know it sound like a cliché, but Adrian has his good days and bad ones and seeing him happy like that makes the hard ones worth it.

“It’s priceless to see how something like a pair of gloves with lights can give him so much joy and we couldn’t stop talking about his reaction for days.”