Home Good News Beloved Veteran Whose 90th Birthday Was Cancelled Due To Coronavirus Is Driven... 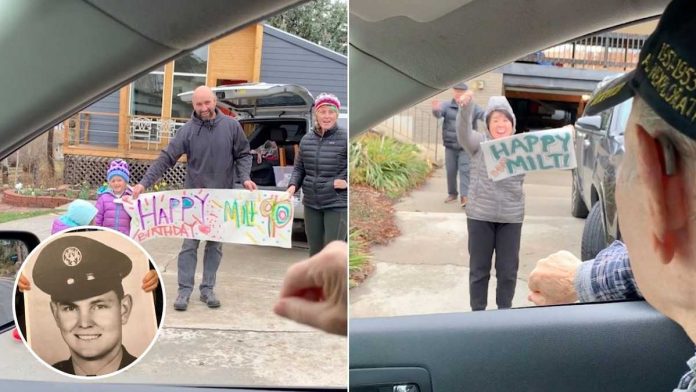 A loving group of neighbors were not going to let the coronavirus’ social distancing guidelines stop this veteran’s 90th birthday celebrations –  as they surprised him with a street parade.

The residents all took to their drives holding placards and signs wishing Milton Eatchel, a veteran of the Korean War, a happy birthday as he was driven through his community in his car.

Due to the global pandemic, Milton had to cancel his birthday plans that he had been looking forward to for weeks – much to his and his family’s disappointment.

Milton’s daughter, Susan Fredrickson, had planned to fly in from Minnesota for the big occasion, but when her husband Mark’s workplace saw an breakout of the virus, and the fact that she works at the Mayo Clinic, the couple decided to cancel their plans last minute.

Milton’s wife, who he was married to for 61 years, passed away seven years ago, and so he would always look forward to birthdays as a way of gathering friends.

Then, as guidelines began to advise against social contact – especially for elderly people – Milton, who lives in Orem, Utah, had to accept that he would not be having a large gathering for his special day, either.

But, fortunately for Milton, his other daughter Jane Hayashu, 57, and their neighbors had other plans.

Milton is very active for his age, Jane said, and he often walks around the small Orem community of Meadowlark, greeting those who live in the area.

On his birthday on Thursday March 18, more than 50 households put up signs and came out to celebrate the new nonagenarian’s big day.

As he was driven through the neighborhood, much to his surprise, Milton was greeted by neighbor after neighbor – staying a safe distance in the car and waving as he passed by.

Jane, who is one of Milton’s six children, captured the moment on video, which her daughter, Sarah Allen, 25, then shared on social media.

Jane said: “With all of the sadness and fear out there, here are people serving a 90-year-old man! It’s everything for him.

“He is so happy today and can’t believe everybody went to all that trouble for him.”

Sarah added: “Due to the coronavirus, most of my grandpa’s children and all of his friends were unable to visit him.

“I hope this moment is able to cheer up everyone who is burdened by all of the recent bad news.

“This video shows that despite the current isolation, people can still be here for each other in really thoughtful and creative ways.”