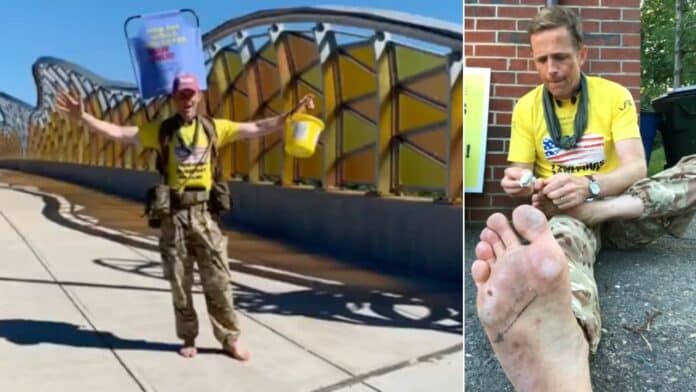 A British Army Major is marching 1200 miles barefoot across the East Coast to raise money towards life-saving treatment for his daughter battling a rare genetic disease.

The diagnosis means by the time Hasti is 12 her health could go into decline due to the potentially life-limiting condition – which currently has no cure or treatment.

However, The Jackson Laboratory in Maine has made significant progress in their work of creating a gene therapy treatment for CdLS in and is nearing clinical trial.

But the family need to raise at least $3.4M to provide treatment and hope for Hasti and others living with life-limiting genetic diseases – 95 per cent of which currently have no treatment at all.

Chris and wife Hengameh live in fear worrying about how the condition will impact their happy-go-lucky daughter’s future, and her dreams of becoming a dancer and chef.

So Chris decided to take on two grueling challenges to help raise funds.

Last year Chris, who has served in the British Army for 14 years, endured a 700-mile barefoot walk from Land’s End, Cornwall, to Edinburgh in Scotland over 35 days.

Now, Chris is taking on a new, bigger battle – fighting for Hasti’s future by marching 1,200 miles barefoot from Maine to North Carolina in military kit doing a marathon a day, non-stop and barefoot.

He is carrying 55lbs of equipment on his back which is everything he needs to camp out overnight in order to keep costs down so every cent raised can be used to fund the pioneering research.

Chris said: “I’ve been deployed on operations to Afghanistan twice, but I see this as my third tour of duty.

“I want to fight to create a treatment not just for my daughter, but for all children across the world who have been diagnosed with a rare genetic condition – every child deserves the opportunity to fulfil their dreams.”