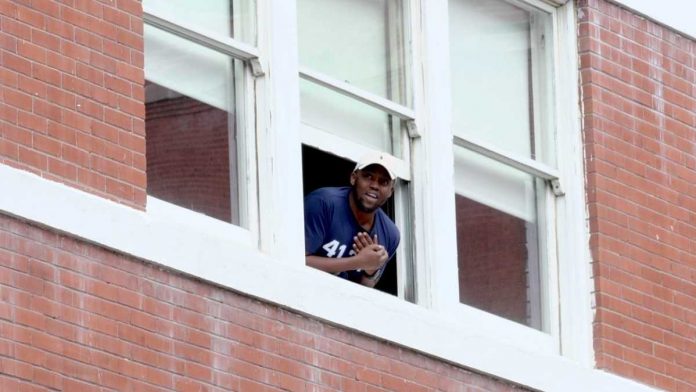 An apartment block in Dallas burst into a singalong as people leaned out of their windows to sing the legendary Bill Wither’s track “Lean on Me.”

Such performances have become a sign of solidarity amongst residents in Europe as people have been forced to self-isolate in their homes to help combat the coronavirus outbreak.

And on Friday March 20, Danzel Barber of the Southside on Lamar building in Dallas, Texas, leaned out of his window and began singing, grabbing others’ attention.

Before he knew it, dozens of open windows began joining in with Denzel, a part-time performer, while others observed and filmed the beautiful spectacle.

The performance was suggested by fellow resident Bonnie Curry, a radio personality, who had seen the singalongs in Italy and thought it would be a good idea to channel such positivity.

Bonnie made the request on the buildings list serve, suggesting a time the performance would take place.

Another local, Mark Birnbaum, 72, happened to see the posting, and being a videographer, he headed outside at exact time, not knowing what to expect.

Having set up a couple of cameras – and despite the drizzle – Mark and his wife, Margarita, were able to capture Denzel’s performance, as well as the reactions of those in the other windows.

Dallas County fell under a “shelter in place” order on Sunday night, and since then residents in the block have been complying by that order, Mark said.

Friday’s performance provided relief for those working from home or confined to isolation, as well as a sign of solidarity for the neighborhood.

Bonnie Curry, who organized the performance, said: “I immediately received lots of responses from neighbors who loved the idea and said they would join in the song.

“One of them in particular stuck out to me, Danzel Barber, his note said ‘I just saw your note on my door and would love to join you – outside of my professional life I’m a singer and have been for over 20 years, performing at weddings, funerals and the occasional karaoke.’

Mark added: “Our cultural landscape will be forever altered, but hopefully some good and fine things will emerge, perhaps a new and refreshed attitude about physically being with each other, less on our phones.”