Home Good News 80-year-old And Her Personal Trainer Go Viral As They Celebrate Her Completion... 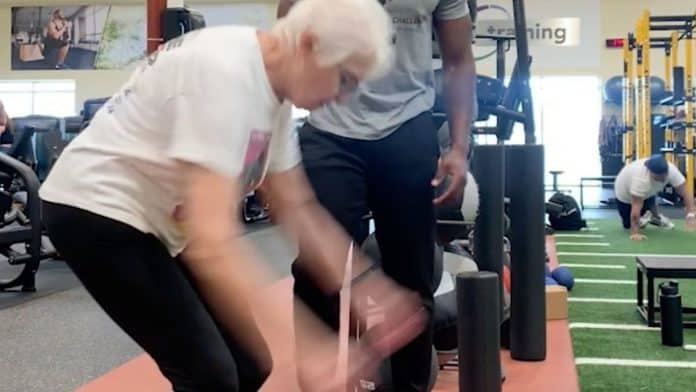 A personal trainer and his 80-year-old client have gone viral after the coach shared a video of them celebrating as she successfully completed a box jump she spent months building up to.

Since January, Betty Crosby, 80, has been working with trainer Torey Bowman, 24, to land an 18-inch box jump after being inspired by a video of 70-year-old man performing one.

With Torey’s help at her local Gold’s Gym in Greeley, Colorado, the paid have been working on Betty’s balance, stability, strength and agility, while also building what they called a “grandma and grandson” relationship in the process.

One day, Torey showed Betty a video of an elderly person completing a box jump and suggested that she try it, too, one day.

Betty was reluctant at first, but she eventually built up the strength in her lower body that Torey felt confident she could do so.

On May 21, Torey set up his camera while Betty looked at the 18-inch-high box.

The trainer then advised his client how to drive into her jump, and, just like that, Betty leaped onto the platform.

As soon as she did, Torey raised his arms in celebration, walking joyously around the gym and cheering.

Torey later shared the video on his TikTok channel, with the post receiving a number of loving comments from admirers of Betty’s dedication.

Going forward, the pair plan to continue building Betty’s lower body strength and balance, as well as working on a bicep injury that caused her to first come to Torey.

Speaking of Betty’s viral box jump, Torey said: “I had all the confidence in the world that she could complete the box jump.

“When she was successful, I felt a sense of accomplishment myself because I knew she could do it.

“Betty was extremely proud of herself and was glad to be able to accomplish this goal we set.

“I was proud of Betty and with hard work, determination, and training we were able to accomplish this goal.

“It has been an overwhelming experience and has been amazing to see the positive impact it has had on other people’s lives.

“It means a lot to know that people understand the amount of work that was put in to accomplish this goal.

“It was amazing to see how important health and fitness is to the world.

“We both appreciated all the support as our hard work didn’t go unnoticed.”