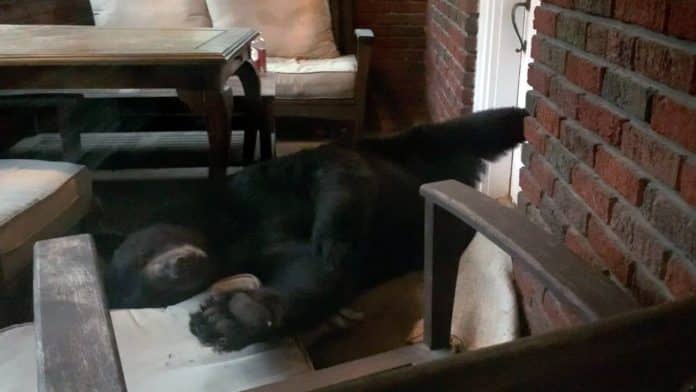 A woman was woken in the middle of the night by a bear sleeping on her porch – and it was still there in the morning lying flat out using one of her cushions for comfort.

On August 21 in Asheville, North Carolina, Kristen Wilkerson was woken up by her dog barking at something outside.

Accustomed to bears in the area, she thought it was most likely one trying to get into her garbage so went down to investigate.

Having seen the trash knocked over, Kristen went back to bed – but hours later, in the early hours of the morning, her dog started barking yet again.

This time, Kristen’s husband went to investigate, and on his return, said there was something downstairs his wife might want to see.

Kristen, filming the moment, headed out to her porch, where she discovered a large black bear making itself comfortable.

The bear remained on the porch for a number of hours eventually using a cushion to make its bed for the night comfier, with its head resting on one of the chairs and a leg up in the air.

Eventually once daylight arrived, the bear woke up, had a yawn, scratched himself and headed off back into nature.

Kristen, who watched the bear for a number of hours, said: “We’re pretty used to seeing bears, so I wasn’t scared – I was inside the house so it wasn’t scary at all.

“The first thing I did was laugh then I watched him for about two hours straight.

“We’ve had lots of bears in our back yard and in our trash, but to have a bear lounging on our porch was a first for us.

“It was a once-in-a-lifetime experience and we’re really hoping he’ll come back for another stay.”