Home Good News Toddler Has Adorable Reaction To Seeing Herself In Portrait Her Grandfather Painted... 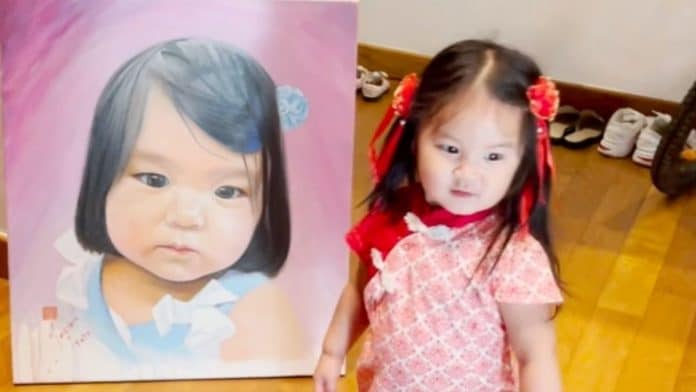 A toddler jumps up and down with excitement as she sees a portrait her grandfather painted of her for the very first time.

In the cute footage, 21-month-old Eve Zhou walks across her grandfather’s apartment in Singapore, pointing to a new work of art on the wall.

As Eve approached, she could tell that the girl in the painting – a portrait more than a year in the making – was clearly her.

After Eve’s grandfather, Tazran Tanmizi, 62, took up painting as a hobby, he declared in 2019 that he would like to paint a portrait of his granddaughter.

Francesca, Eve’s mom, loved the idea, and when she headed to her dad’s apartment on February 13 for the Lunar New Year, Eve caught the new painting out of the corner of her eye.

RELATED: Kids Discover Duffel Bag Belonging To Military Dad Before He Suddenly Appears To Reunite With Them

Her mother happened to capture the initial moment on video, with Eve standing beneath the painting and pointing up in excitement.

The family then removed the portrait from the wall, so that it was at the toddler’s eye level, and as she stood next to her grandfather’s masterpiece, she couldn’t hide her delight.

Francesca said: “My dad brought the painting down so Eve could get a closer look, and she got really excited – she even pointed to the painting when I asked her where her pretty face was.

“Eve spent the entire night pointing out the painting to everyone and hugging it.

“It was really cute, and it’s even better seeing how excited my dad was.

“It was just such a genuine reaction.”