Home Good News Thrill-Seeker On Cloud Nine After Popping The Question At The End Of... 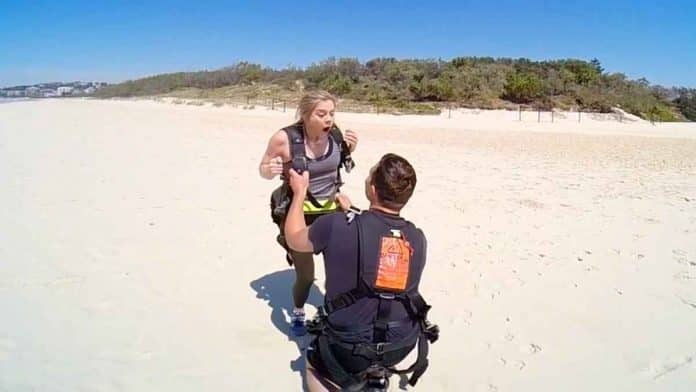 A man was on cloud nine after popping the question to his girlfriend as he landed from his very first skydive.

Barry Hartman, from Tsawwassen in British Columbia, Canada, had always wanted to try the extreme sport, so he and girlfriend Jenna Cox took the plunge while on a trip to Australia.

At a Skydive Australia center in Noosa, Queensland, Barry, 32, craftily placed an engagement ring that his friend had made for him in his zip-up pocket.

On the way up, Barry admitted he was a bag of nerves – a combination of preparing to jump out of a plane for the first time and the question he was set to ask.

After jumping out of the plane, he then informed his guide that he was getting ready to propose when they were just a few minutes from the landing on the beach.

As soon as the pair touched down on September 17, Barry immediately pulled the ring from his pocket, getting down on one knee.

A shocked Jenna joyously said ‘Yes’ as she began to well up, while the guides filmed the emotional moment.

Barry said: “I was a combination of nervous, excited, happy and fulfilled.

“I was thinking it would be fun to share the moment with friends and family that couldn’t be there – everyone seemed to love it.

“I’m now looking forward to marrying the love of my life in Surfers Paradise, Australia in February 2021.”