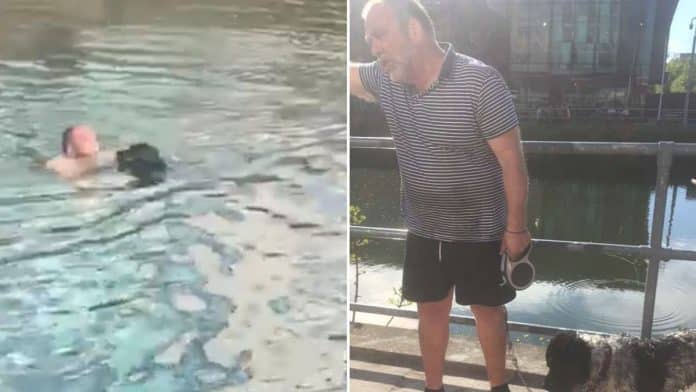 A kind-hearted passerby helped rescue a dog and his owner from a river.

Onlookers watched initially as the spaniel swam up the Brayford Pool in Lincoln, United Kingdom.

His owner was trying to coax him to the side in order to haul him back out, but the dog began to struggle.

Fearing his spaniel would drown, the owner dived in and swam towards the dog, helping him to the side of the steep banked area.

But unable to get out by themselves, a quick thinking passerby on a skateboard – believed to be a university professor – jumped over the railings to help haul them out to safety.

Student Jessica Murphy, 21, saw the dog swimming in the water surrounded by high banks and posted a video on social media of the drama unfolding.

She said: “At first we thought it was okay, but then realised it was struggling when its head kept going under water and it was trying to climb onto the birds nests and the rubbish to stay afloat.

“This was happening for what seemed like 15 minutes. I saw the boy who rescued it get off his skateboard and climb over the edge straight away, no hesitating, and by now about 30 people were watching and he was the only one acting.

“Then out of nowhere a man came swimming over and tried to grab the dog, but instead he was accidentally making it go under the water so he had to stop.

“The dog swam to the boy and he pulled the man and dog out the water. The dog was frightened of the train so he wouldn’t pass that bit so he was just swimming in circles.

“He had cuts on his legs from jumping in, but him and the dog were fine and his wife came and got them.”