Home Good News Parents Pulled Over By Police Stunned As Military Son Hops Out Of... 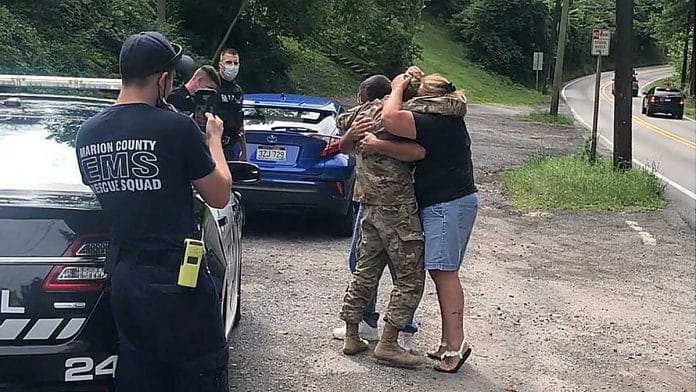 Shocked parents pulled over by police are left stunned as their military son hops out of the cop car to surprise them on return home from an 11-month deployment in the Middle East.

Nancy and Richard Stahl had no idea son Kenneth, 20, was set to come home when they were pulled over on August 1 in Fairmont, West Virginia.

Kenneth, who served as a private in the national guard, had been deployed across the Middle East including Iraq, Syria and Kuwait.

Having been accepted into Fairmont State University, Kenneth was able to return early but decided not to tell his parents.

Instead, on the day of the surprise, a friend of Kenneth’s started his camera rolling and a Fairmont Police car pulled his mom and dad over as they drove down a country road.

Nancy, 44, thought she was being pulled over for a speeding stop, but officers told them the vehicle had been tied to a drug transaction, which would require the family to exit their vehicle.

As Nancy and Richard, 43, got out of the car, Kenneth timed his exit from the police vehicle at exactly the same time, catching his mother’s eye.

Nancy immediately screamed, “OH MY GOD” and ran toward her son, who embraced both Nancy and his father.

Kenneth’s brother, also named Richard, was in the car with his parents, keeping himself back as he was in on the surprise.

At Fairmont State Kenneth will major in physical education and hopes to become a teacher.

Nancy said: “I was mad and angry because I thought I was getting a speeding ticket.

“When the police officer told me it was that my car was seen in a drug transaction, my heart was pumping and my husband was stunned.

“They then asked us to step out so they could search our vehicle – I was mad and had my head down.

“Then, I looked up, and there was my son, Kenneth – before I knew it I was flying to hug him.

“There was a lot of excitement – I am relieved that he was home with his family, and in my arms.”