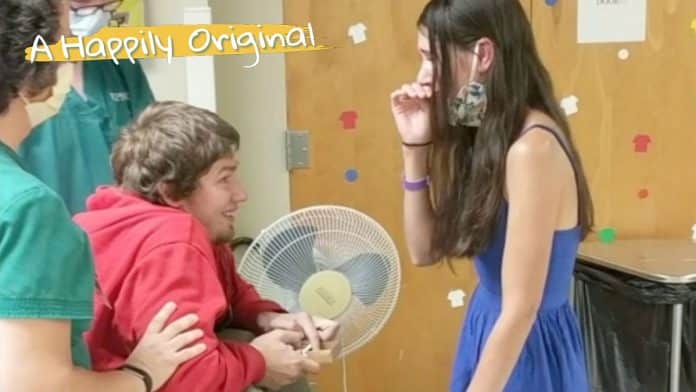 A man told he may never walk again defied odds to walk across the room and get down on one knee to propose to his girlfriend who had been by his side throughout his recovery process.

Brandon Devonshire, 25, from Rome, Pennsylvania, was crushed by a tree on July 30, leaving him with a ruptured vertebrae and spinal cord damage.

According to Brandon, he was cutting a tree that had a piece of logging equipment resting against it – the weight shift causing the tree to fall on him.

He required two rods and eight screws to be installed into his spine for stabilization, and when he started his road to recovery, revealed he felt completely paralyzed.

But over the weeks and months that followed, Brandon began to regain movement and started to work with physical therapists at the University of Pittsburgh Medical Center in Williamsport.

Brandon’s girlfriend, Crickett LeVance, 25, kept his spirits up and supported him throughout the rehab process, and on August 11, Brandon decided he wanted to repay her for her support.

Ahead of his proposal, Brandon had made basic walking movements before, but he was very nervous about getting down on one knee due to his lack of mobility.

But in the personal trainer gyms at UPMC Williamsport, he knelt on a pad and with his upper body resting over the back of a chair, and his PTs asked Crickett to come over.

As his girlfriend faced him, Brandon pulled out a ring, which immediately caused an unsuspecting Crickett to well up with emotion.

Since the proposal, Brandon’s condition has improved dramatically, and he is now even able to run forwards and backwards.

He said: “I want people who see my story to know, don’t ever let anything stop you no matter what they say – in the end it’s up to you.

“I wasn’t supposed to walk but here I am.

“True love does still exist, and nothing can take that from you as well.

“The nerve-racking part was getting down on one knee, it was a long way down and I was barely mobile at the time.

“The response to the moment has been phenomenal. “My little family has really pulled together and what better time for me to have that happen.”