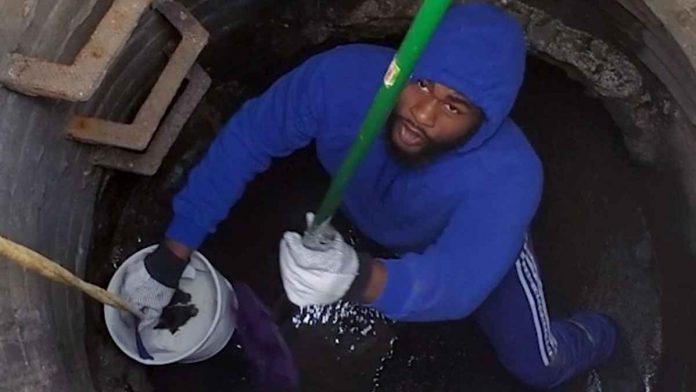 A kindhearted man bravely made his way into the darkness of a sewer to rescue a family of trapped ducklings after all other options had been exhausted.

Monica Cyrocki, 32, was alerted by her mailman on June 12 that a strange noise was coming from a storm drain near her home in Jackson, Mississippi.

She called her fiancé, Kyle Morgan, 26, who after inspecting the noise discovered it was a group of ducklings trapped inside the drain.

With the help of around 10 neighbors, the group was initially able to rescue six young birds.

But it quickly became clear there were more ducklings trapped in a sewer pipe deeper underneath the road.

Monica and Kyle contacted the necessary local services – Department of Natural Resources, police, animal control – but none were able to help for a variety of reasons.

And so, with Monica filming, the group took off the manhole cover and Kyle headed down into the darkness and water below.

He and five others created a system using a bucket, rope and net that would allow the ducklings to be lifted out of the sewer.

Once the ducklings were all free, Kyle and his neighbors looked for the mother duck, but she was nowhere to be seen so they drove the rescued ducklings to the nearby Wildlife Rehabilitation and Education Center, in Eaton Rapids.

The ducklings will now remain in the center until they can be released into the wild.

Kyle, who recently became a new father, said: “This was a team effort, I did go in but it all started with Monica and our mailman.

“Thank you for everyone that played their part in this, to come together as one community and forget what is really going on in the world to do something good.”