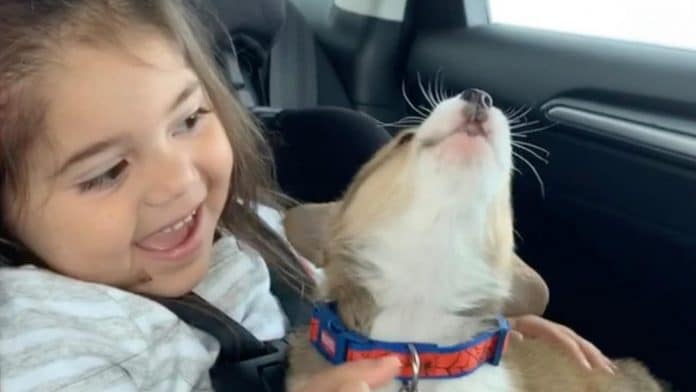 A little girl riding home with her new corgi puppy was amazed when she discovered his talent for singing.

But as the pair were being driven home, her parents decided to turn on the radio.

And as Frank Ocean’s “Self-Control” played, Odin began to howl at an auto-tuned backing section that sounded like a dog howling.

Then, as Ocean’s vocals kicked in, Charlie-Jo and Odin began howling together in time with the music, the youngster smiling and holding her new friend tight.

Charlie-Jo’s parents, Devyn Saldivar, 22, and Destiny, 22, posted the video on their Twitter account, which soon received tens of thousands of likes and retweets.

Devyn said: “I still watch the video and think it’s super cute and it always puts a smile on my face.”