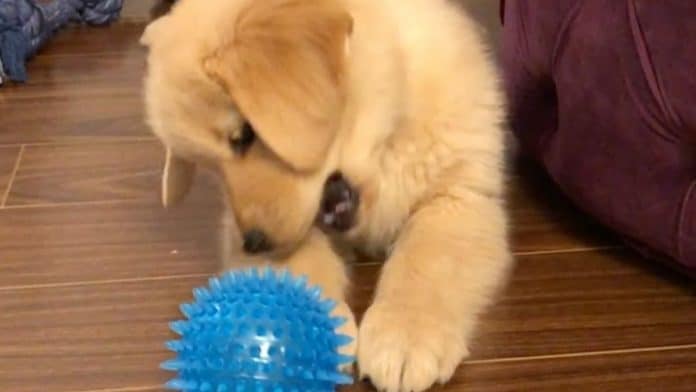 An adorable golden retriever puppy didn’t know what to do the first time she came into contact with a spiky ball – appearing to give herself phantom pricks.

While similar toys are a favorite for many canines, four-month-old Winter had some trouble getting used to strange round object.

As she approached the ball at home in Ajax, Ontario, the pup would move her head close to the ball, only to jolt back in shock.

Most amusingly, though, Winter wasn’t even making contact with the ball – instead reacting to the pricks that she was expecting to receive.

Her owners Ryan and Stephanie Franklin captured the cute moment on video, sharing it to Winter’s Instagram account, Miss Winter.

Ryan, 38, said: “We thought it was hilarious and sweet to see that she reacted in such a serious manner.

“She is very inquisitive, and we like to watch her experience things for the first time.

“People love it and they continue to message us about it.”