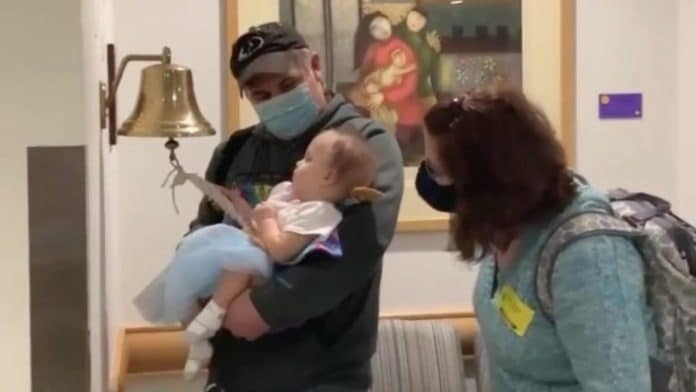 A toddler with special needs told she had a 5-10 percent chance of living past her first birthday rings the ‘all-clear bell’ having beaten cancer on the day she turned two.

In the heartwarming footage, Faith Spicher is carried through the ward at UPMC Children’s Hospital of Pittsburgh as staff gather to sing Happy Birthday.

Once the singing had stopped, Faith and her father, Deryk, 39, headed to the wall and rang the hospital’s cancer all-clear bell to a huge round of applause.

The moment took place on January 15 after a two-year period of emotional uncertainty for Faith’s family.

Faith was born with Full Trisomy 18, known as Edwards syndrome, which is a chromosomal disorder associated with abnormalities in many parts of the body.

Her family were given more devastating news in August 2020 as Faith had a Wilms Tumor, a kind of cancer often associated with children with Trisomy 18.

READ MORE: Woman Cries As She Rings Cancer Bell That Was Delivered To Her Home Because Her In-person All-Clear Meeting Was Canceled Due To Covid-19 Restrictions

From there, doctors had to make sure that despite the cancer being dead at cellular level, Faith was still fighting the likes dehydration and infections.

Finally, on January 15, Faith completed her final chemo treatment to remove the tumor.

Her family, from Force, Pennsylvania, later shared a video of their daughter’s bell-ringing with the hospital, hoping her fighting spirit would inspire others.

Mom Brandi said: “I was overjoyed – this was a momentous occasion and I was so happy we were surrounded by people who wanted to make this day extra special and celebrate it with us.

“There were tears of relief that we did it – chemo was done.

“No matter how dark things may seem, no matter what people say, no matter the facts and statistics, there is always hope and there is power in prayer.

“Faith has proved that miracles can happen to anyone – she is definitely our miracle, our gift from God.”