Home Good News Girl Who Is Visually Impaired Rides Bus To School On Her Own... 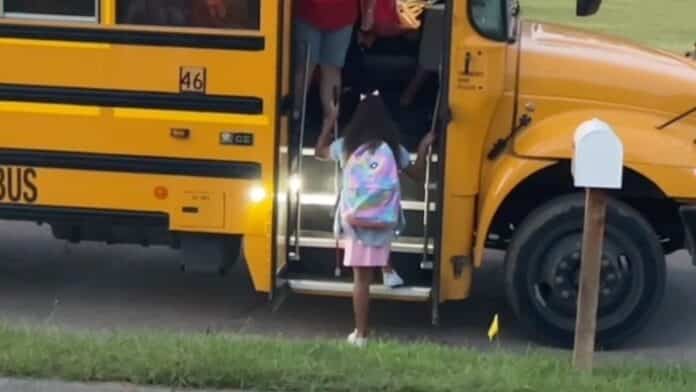 A fourth grader who is visually impaired has gone viral after her mom recorded her successfully making her own way onto her school bus for the very first time.

But, seeking more independence, Addy asked if she could start riding the bus on her own.

Ambrea was initially nervous, but on August 17, as her daughter made her way to the vehicle, her mom took out her camera phone and began to record the moment.

Taking the bus has now become Addy’s favorite part of the day – she enjoys joking with her bus driver Mr. Ryan [Cariveau], and now the fourth grader is now so confident that when she hears the vehicle coming in the mornings, she rises to her feet and heads out on her own.

Mom Ambrea shared the moment online where the post quickly went viral receiving millions of views and an outpouring of love.

Addy said: “Riding the bus is my favorite part of the day – Mr. Ryan is awesome we’re always singing and telling each other jokes and laughing.

“I remember when it was raining and he asked me if I had an umbrella, and I was like, ‘Nope!’ and he just jumped up and helped me.”

Ambrea added: “The responses have been wonderful, with people cheering her on, people proud of her, and being concerned as well.

“It’s just a good feeling all around to have people support her – even if they don’t know her, it honestly makes her happy, too.

“Addy has said she hopes people and kids can watch her video and get that, even if you have a disability, you do whatever you set your mind to and always be proud of yourself.”