Home Good News Emotional First Dance Between Girl And Brother With Special Needs Who Has... 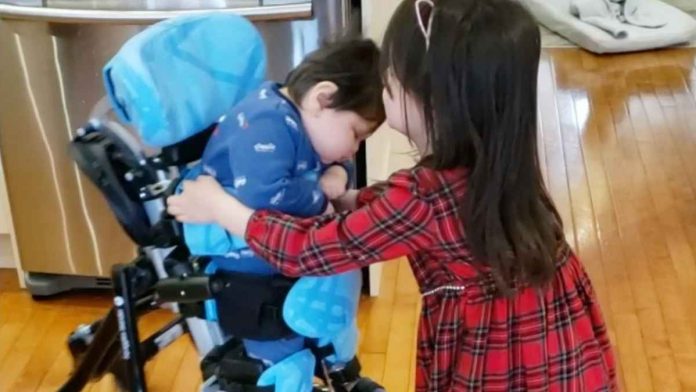 This is the emotional moment a two-year-old boy with special needs was able to dance with his older sister for the very first time.

In the wholesome footage, Kylee Shaver, aged five, holds the hands of her brother, Magnus, as she moves him around the floor of the family kitchen in Oakville, Ontario, Canada.

Kylee’s joy was clear to see as she wheeled Magnus, aged two, in his stander, moved her brother’s hands in time with Ed Sheehan’s “Perfect”, and even showed Magnus a quick spin.

The moment took place on May 2, and Magnus’ mother, Tiffany Shaver, 34, explained how it been a long journey to get to this point.

Magnus has no gross motor skills, so he cannot sit or stand independently, she said.

In 2020, the family purchased Magnus a stander, which they hoped would help with his physiotherapy by allowing his body to experience the feeling of standing, as well as help with his hip and bone development.

Waiting for Magnus to get used to his Leckey Squiggles Stander took some time, but one day while he was in the standing frame, his sister was dancing in the kitchen and it was suggested that she include her brother, too.

Kylee joyously obliged, and so Tiffany filmed the moment, which she later shared on social media to an outpouring of support.

At the age of 34 months, Magnus is fed exclusively through a feeding tube, and he is physically the size of an eight-month-old because of a growth hormone deficiency.

The youngster has not grown in two years, Tiffany said, and despite exhaustive genetic testing, he remains undiagnosed.

As Magnus is fed exclusively through a tube, his mother set up Tubie2Go as a way of providing parents across Canada with a stylish and affordable way to feed children with similar conditions – a group known as “tubies.”

These backpacks are designed to look like animals, which Tiffany hopes will provide an element of normalcy to children with feeding tube needs.

Since sharing the video of Magnus and Kylee dancing, the moment has received more than 100,000 views on the Tubie2Go Facebook page.

Speaking of the moment, Tiffany said: “I never would have imagined that it would be shared so many times but I guess it makes me realize that there are probably a lot more families with special needs children out there that can relate to the message that our milestones may be inchstones to the average family – but they matter just the same.

“It also makes me realize that special needs children or not, people recognize the immense love between two siblings here.

“Based on the comments posted, the video has created a lot of tears, but in a good way.”