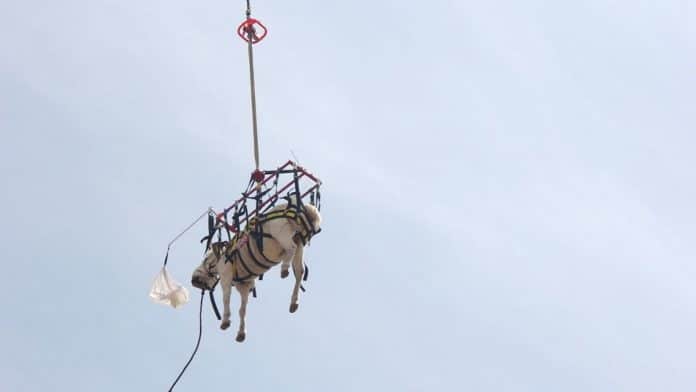 A horse has been dramatically rescued from a construction trench by helicopter – after becoming trapped.

The large white horse named Misty had wandered off a nearby property and fallen into the hole.

She was discovered by locals, who quickly phoned the Los Angeles Fire Department to help free her.

It was determined that a helicopter lift operation was in order as the distressed horse reacted badly to attempts to dig a ramp for her to climb out of.

A local heavy-lifting chopper was scrambled. Misty was sedated, blindfolded, strapped into an Anderson Sling and then air lifted to safety.

Officer Armando Navarrete of the L.A. based Specialized Mobile Animal Rescue Team (SMART), said: “We talked about digging a trench to walk the horse out, but she wasn’t coping very well with people, so to make all that sustained noise would probably be more detrimental for the horse than the personnel on the rescue operation.”

Footage captured from the scene shows the L.A. County helicopter hoisting Misty high up into the air, before gently lowering her onto an empty space.

There a vet made sure the pony was ok and massaged her legs to reduce the effect of the sedative.

The dramatic rescue, which took place on May 8, lasted over two hours in the searing California heat.