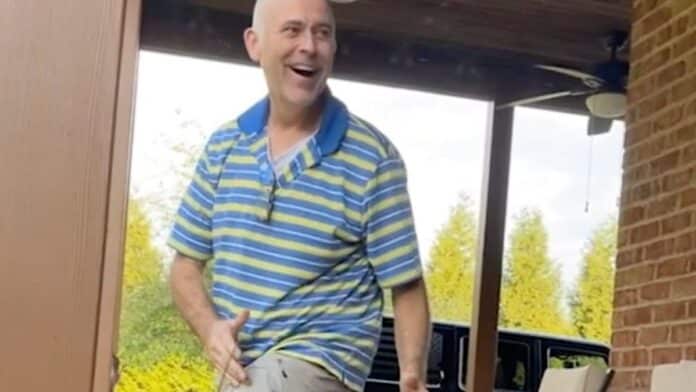 A man with Parkinson’s disease surprised his kids with dance moves after he regained movement thanks to a deep brain stimulation device.

Mike Roll, from Jefferson County, West Virginia, was diagnosed with Parkinson’s in 2014.

He had been dealing with symptoms for 10 years prior to diagnosis, but once he discovered it was Parkinson’s he became anxious about how it would affect the rest of his life and his family.

Mike’s wife of 35 years, Paula, tried everything to support him but during the first two years, the disease affected him so badly he felt life was slipping away.

But earlier this year, Mike received an appointment with his neurologist to talk through the possibility of having a Deep Brain Stimulation (DBS) procedure.

DBS does not cure Parkinson’s but can provide symptomatic relief – helping the sufferer walk and move more easily.

After confirming that he was a suitable candidate, Mike underwent two operations implanting the DBS and on August 23rd, it was due to be activated.

Mike went into the appointment barely able to control his body, shaking vigorously as he moved, but after activation was left walking with ease.

So amazing was his transformation, he and his wife rushed home where two of their daughters, Andrea and Hunter, were waiting to see the transformation and couldn’t believe their eyes.

READ MORE: Inspirational Man With Parkinson’s Disease Keeps Up Intense Workout Schedule With Personal Trainer In Hope It Will Prolong His Time Left With Beloved Wife

Mike was so happy to be in control of his body again that he danced around their porch, with his daughters laughing and screaming in joy at the difference the DBS device had made.

And in April, Mike was even able to walk his daughter Hunter down the aisle on her wedding day, something he could only have dreamed of months before.

Since then, on September 18th, Mike was not only able to walk his youngest daughter Hunter down the aisle but also, dance with her at her wedding.

Mike said: “Being able to do things that I haven’t been able to for the past few years feels amazing to me!

“DBS is not perfect but is very good, and so much better than taking 8 + pills a day.”

Paula said: “What an amazing feeling that was seeing him walk her effortlessly!

“It was so emotional seeing them dance, especially when he could just barely stand with our middle daughter to dance with her at her wedding this year!

Mike’s daughter Andrea said: “Since his symptoms started getting worse it felt like we lost the old dad.

“Now, it’s like we have a second chance again and a chance for his granddaughter to know the real him.”

“We were scared about the surgery but are happy to see him happy and back to himself.”