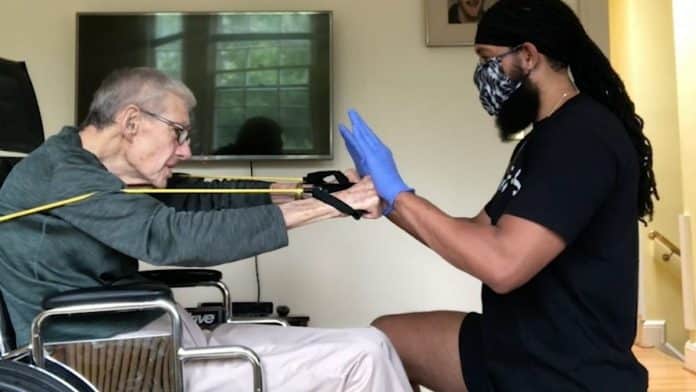 An elderly man with Parkinson’s disease is inspiring others with his intense workout schedule – a routine he hopes will prolong the time he has left with his beloved wife and family.

Wheelchair-bound Julian Kossow, 87, has been fighting the degenerative disease four days a week with PT Michael Daniels, in Washington, DC, sharing his workouts on social media.

Michael, 28, calls Julian his brother, as he lost his great-grandmother to Parkinson’s and had first-hand experience of the disease before he started working with Julian two years ago.

Michael said he was too young to help his great-grandmother in her fight, and so he sees his relationship with Julian as a second chance to help someone battle the disease.

Julian’s reasons for working out are family-driven, as he said he hopes that keeping active and fighting back against the illness will allow him to spend more time with his wife and his family.

As coronavirus precautions started closing down parts of the country, Julian couldn’t leave his house because of the risks involved, ruling out the gym – but was determined to keep moving.

And so, Michael was able to bring the workouts to his client, taking the necessary precautions by wearing a mask, gloves and staying a safe distance.

In some of the videos Michael shared, Julian uses bands to carry out push and pull exercises, while in others, his uses all his strength to punch a cushion or march his feet on the floor.

It was Julian who initially called Michael to become his personal trainer two years ago, and by working together the pair hope to slow the deterioration that comes with Julian’s illness.

Michael said: “I love Julian – he’s said I’m like his brother, and that really touched me.

“I saw my great-grandmother suffering with Parkinson’s, but I was too young to help her, so I see Julian as a second chance to help someone with the disease be as stable as possible before the disease ultimately wins.

“At a time when the pandemic has been happening, everybody has been scared or frantic, with no hope in the world.

“Julian’s story was a light that everyone was looking for, hoped for, and needed.

“It’s more than a client-trainer relationship: it’s two human beings coming together to help him live as long as he possibly can.

“Through posting the videos, I was hoping to inspire, educate and motivate anyone who follows me.

“I wanted to show people that this 87-year-old man – no matter what he was going through with Parkinson’s, what was going on in the world, with COVID-19 or social issues – was willing to put this health first.