Home Good News Cancer Patient Surprised As His Friends Shave Their Heads In Support Of... 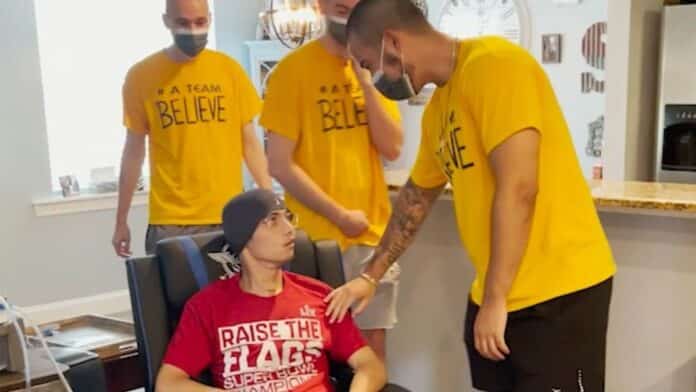 A 22-year-old battling cancer was shocked to see his best friends had shaved their heads to support him.

Aaron Scott from Tampa, Florida was sent home from the hospital in Orlando on September 4th after being there due to his cancer since mid-June.

Throughout Aaron’s battle with cancer, he has had the constant support of not only his family but also his closest friends.

Matt, Kam, and Chris first met Aaron at the University of Central Florida and have been best friends ever since.

Aaron’s favorite TV show is Ted Lasso after binge-watching it with his friends at university,

Within the show, a sign saying “BELIEVE” is seen throughout, which gave them the idea to make t-shirts and bracelets with the message on as it fitted with not only his love for the show but his fight against cancer.

They would visit him in hospital as many times as they could so when they heard that Aaron would be going back home, they thought it would be a great idea to surprise him.

On September 4th, Aaron had finally been discharged and was back at home in Florida when Matt, Kam, and Chris walked in wearing their ‘BELIEVE’ t-shirts and had shaved their heads.

As Aaron had already lost his hair, they thought it would be the best way to prove to him that he isn’t battling cancer on his own.

Aaron was shocked and in disbelief they had done this for him, so he took his hat off to join in.

Aaron’s friends said: “Aaron is such a healthy person and taking care of himself was something he was always really passionate about before his diagnosis so when we found out that he had cancer, we just couldn’t believe it.

“We were devastated and just so angry at how unfair the situation was because he’s such a good person and has such a good heart.

“To see him express himself in the condition he’s in made us feel so happy to know that our friend is still here and remember all the time we shared.

“He’s the strongest guy we know, and he will come back from this.”

Aaron’s sister Ashton-Presley who recorded the special moment said: “It felt nice for him to be able to just chill and hang with his buddies like the old days.”