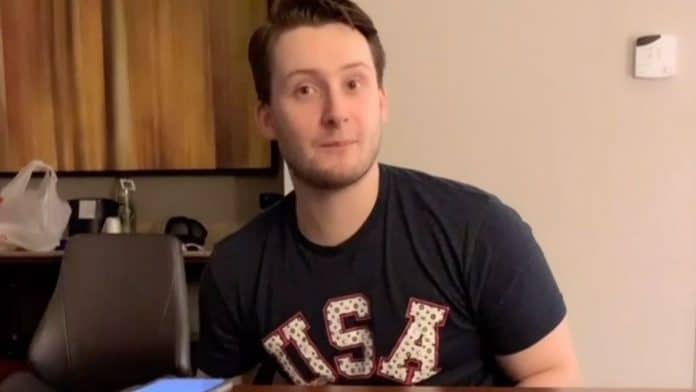 A boyfriend surprised his girlfriend during a ‘favorite items’ game by revealing an engagement ring during the “Something We Could Do Together” round.

Jake Brophey, 22, and his girlfriend Veronica Enters, 23, were on vacation in Nashville, Tennessee, when Jake suggested they play the game.

The concept was simple: Jake and Veronica would buy the other’s favorite drink and snack; something in their favorite color; something that reminds them of the other person; and, finally, something to do together.

With Veronica’s camera rolling on October 19, for the first two rounds, the couple exchanged the likes of apple juice, a sports drink, chips and dip, and crackers.

Then, with the favorite color and objects of reminder rounds out of the way, it was time to present something to do together.

Veronica went first, laying down a 750-piece jigsaw in front of her boyfriend.

It was then that Jake went for the big reveal, placing an open box with a ring inside it atop of the jigsaw.

A stunned Veronica then stopped recording as she dropped her phone in shock – but did still say “Yes”.

After the proposal, Veronica shared the video online which quickly went viral receiving well-wishes from across the world.

She said: “We had talked about doing this game for a while, so I didn’t think anything of it.

“I seriously wasn’t expecting him to propose right then and there – when I saw the ring I didn’t believe what was happening.

“I was completely shocked.