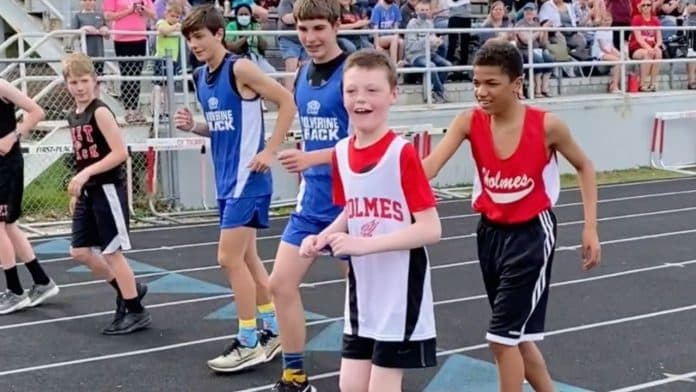 A boy with a rare genetic condition impacting less than 10 people worldwide entered and won his first ever track meet thanks to his fellow runners – crossing the finish line to raucous cheers.

Beau Weichers, 13, who has special needs due to an ultra-rare condition called ZBTB18, was competing in a track meet at Holmes Junior High in Cedar Falls, Iowa, on April 27.

During the meet of numerous schools, Beau, dressed in white, wanted to enter a sprint race where multiple competitors could run from a single school.

He was next to his classmate Brennan while the other racers came from different schools – and as the gun went off Brennan ignored the race to supportively help Beau instead.

As he wrapped his arms around Beau the runners from other schools – who weren’t told what was happening – immediately slowed to show their support encouraging Beau.

Beau’s mom, Amanda, 42, captured the moment on camera, and as the pair reached the end of the track, her son overtook his competitors to cross the line first in front of packed stands.

Amanda revealed in the week prior Beau had been practicing with the team and building up his excitement.

The sprint was his main event, but, on the day, the school also created other modified events such as discus with a softer frisbee and shot put using a softball.

Amanda said: “The crowd was so loud and all of those boys in that race were encouraging our son and making him feel like a rockstar.

“If applause had been an indicator, he was crossing that line and won an Olympic gold medal – I was trying not to cry.

“I think it was because I was smiling so big that I couldn’t cry I was so proud of the boys and so thankful to their parents for doing such an incredible job in raising their young men.

“When we got home that night Beau refused to take off his track jersey and he kept signing for me to shoot off an imaginary starter pistol and then tell him on your mark, get set, go.

“I finally got the jersey off of him for a bath and then he fell asleep that night watching videos and looking at photos on my phone from the track meet.”