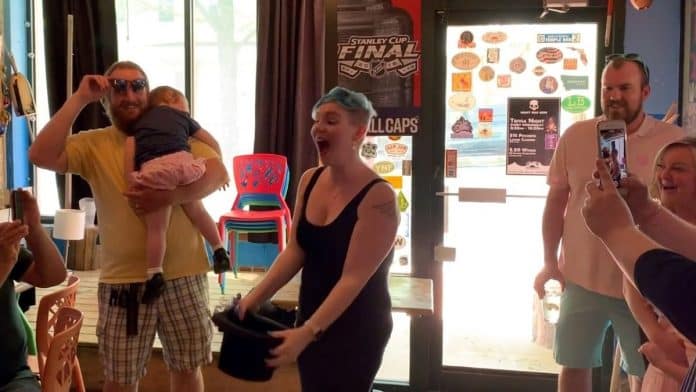 A pregnant woman had her hair dyed pink or blue while blindfolded for a double gender reveal surprise.

Theresa Coleson, from Falls Church, Virginia, has been obsessed with coloring her hair crazy colors since high school and reckons she’s dyed it every color of the rainbow over the years.

Some of her jobs wouldn’t allow her to color her hair, but since working at Mission Catnip Marketing she’s had the freedom to have fun with her hair again, so set about coming up with a creative way to reveal her baby’s gender.

Upon discovering she was pregnant in February, Theresa and hair-stylist friend Tammy brewed up the idea before Theresa took it to her OBGYN and researched it to ensure no hazards.

After getting the all-clear, her OBGYN called Tammy directly with the gender results, and on April 20 Theresa went to Alya Salon to have her hair dyed ahead of her gender reveal party.

Tammy used a blindfold so not to give anything away, and then put a top hat on Theresa so she could travel to meet up with husband Michael Coleson at the party.

The couple gave friends and family colored confetti to throw, and as Theresa lifted the hat to reveal the gender to them, she found out herself from the confetti.

Theresa said: “Since high school I’ve been obsessed with coloring my hair crazy colors – some women want to be blonde or red; I want to be colorful.

“With our first child we were so excited to find out the gender, we opened the gender envelope right away without any reveal or party.

“This time, I wanted to do it right and have a little fun with it. Tammy, my friend and top-notch hair stylist, helped me brew up a fun plan.

“After speaking with my OBGYN and researching, ‘rules’ have changed and dying your hair while pregnant isn’t something that is considered a ‘pregnancy sin’ anymore.

“Though many pregnant women opt to not dye their hair, most research shows the chemicals found in both semi-permanent and permanent dyes are not highly toxic and are safe to use during pregnancy.

“Additionally, only a small amount of hair dye is actually absorbed by the skin, leaving very little that would potentially be able to reach the fetus.

“After performing the early blood test, the gender was determined, and Tammy was given a call directly from my OBGYN with the gender results so there was no temptation for me to find out early – she was the only one to know the gender.

“After weeks of naturally pulling the left-over color from my hair with vitamin C and clarifying shampoo and a small blonde highlighting session, I was a blank canvas.

“I met Tammy at Alya Salon where she blindfolded me to highlight my hair – she hid it very well afterwards with a top hat she had decorated and helped me top off my make-up.

“Then we traveled to meet my family and friends at a local restaurant where we all found out what my husband and I were expecting.

“It was an amazing day and such a unique and fun way to do our gender reveal.”