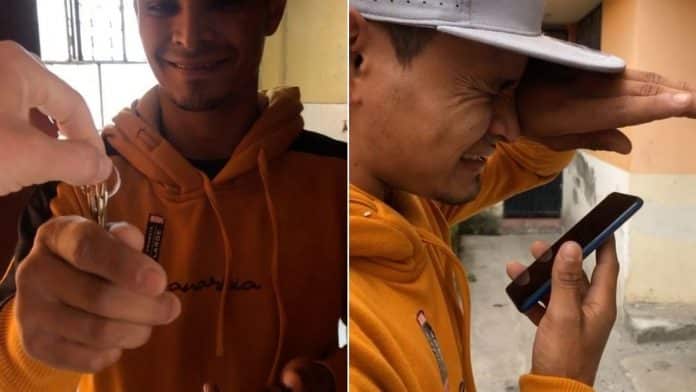 A loving father from Venezuela was brought to tears of joy when, after walking for three months with his son, he arrived safely in Ecuador, where he was presented with a new home and given a phone to call his mother.

According to Aaron Murphy, 33, a charity worker from Salt Lake City, Didier Anres Bermudez Higuita, 27, left his homeland as its economy began to crash, along with his son, Didier, 3.

The pair had left the region after Didier’s wife, Lina, died of a heart attack and work began to dry up, Aaron said.

Having arrived in the city of Tulcan, Ecuador – roughly 1,100 from his home in Barinas – Didier and his son were met by Aaron who moved to South America a few years ago.

While living in the U.S., Aaron overdosed in a condo and decided to turn his life around with charity work, which he shared on his YouTube channel, MURPHSLIFE.

As he moved through Tulcan, Aaron came across Didier and his son as they walked along a freeway, and having stopped them to hear their backstory, Aaron said he couldn’t not help.

The charity worker put them in a hotel for a night, fed them, and a few days later he surprised Didier and his son with a new apartment paid for by donations online.

The Venezuelan family were also thrown a welcome party by neighbors, who helped them with their furniture, Aaron said.

But perhaps the most wholesome moment of all, which Aaron shared with his social media followers, was when the charity worker handed Didier a phone he had purchased for him.

Shocked by the gesture, Didier immediately called his mom to tell her that he and his three-year-old son were safe and sound – the moment bringing him to floods of tears.

“Mom, I’m calling you to tell you something really good, mom,” Didier said before hardly being able to get out any more words with the emotion of it all.

Through interacting with Didier, Aaron discovered that he used to be a cheesemaker in his native Venezuela.

He is now hoping to raise enough money to build a small cheese factory in Ecuador, which he hopes Didier will help run and will provide work for other Venezuelans in need.

Aaron said: “I hope that the people who’ve watched these videos remember to feel gratitude for their many blessings.

“That those who have more than they need can learn and experience the beauty of charity.

“I want Americans to know that what their group of friends spent over the weekend in a bar could be enough to take a family off the streets, build them a self sustaining business allowing their children to have an education, completely changing their lives.”