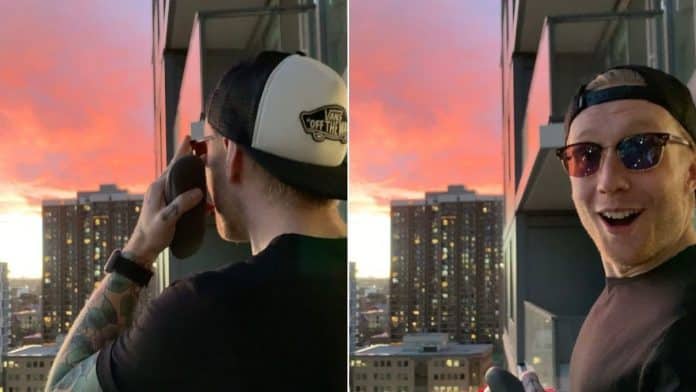 A colorblind nature photographer was left stunned as a specially-designed pair of glasses meant he could finally see the colors of sunset for the first time.

While the average human can see around one million different hues and shades of color, Jay McDonald’s deuteranomaly means that he can only see around 10,000, he said.

As a result, Jay, 28, does not see in black and white, but has a difficult time differentiating red and green, as well as seeing colors like pink, purple, magenta, red – the exact tones in the fall images he shoots for a living.

Jay, a professional photographer based in Calgary, Alberta, Canada, says his condition, has made it tricky to work out the likes of the white balance, skin tones, and tint shift on his day job.

But on November 2, he decided it was time to try on his new pair of Enchroma glasses, which he had delivered a week earlier.

Jay said that because Calgary was moving into “shoulder season,” the colors had disappeared from the trees and landscapes, leaving a duller light skiff of snow.

But that evening there was a vibrant sunset across the city, so Jay headed out onto the 10th floor balcony of his condo and put on the glasses. As soon as he did so, his jaw dropped in shock.

With his girlfriend capturing the moment on video, a stunned Jay declared, “That is not what you see!”

The photographer later shared the video on TikTok and Instagram, which saw the post go viral worldwide.

Jay said: “It’s hard to put into words what I saw.

“What others see everyday is absolutely mind boggling, I still can’t wrap my head around it.

“I was shocked and in disbelief, yet I could feel the endorphins flowing, with the excitement of seeing all of this for the first time.

“It’s hard to explain seeing something you’ve never seen before and didn’t know you were missing out on.

“I also can’t stop staring at my girlfriend’s eyes, cheeks and lips with the glasses on, because her skin is so rich and beautiful.

“I uploaded the video with zero expectations – I just wanted people to experience the same good feelings that I did when watching others’ reactions [to these glasses].

“It’s been encouraging to see the amount of views and shares because I know it’s bringing light to the fact that other individuals can have this same life-altering experience and with such ease.

“It’s not like you have to get laser eye surgery or some type of transplant, you simply put the glasses on and see the world in technicolor, like you’ve never seen before.”