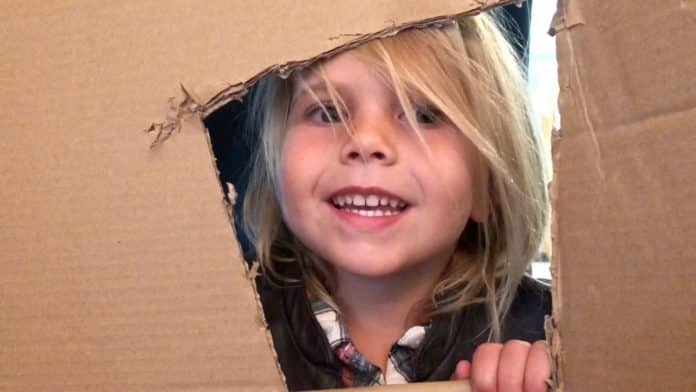 A pair of toddlers have gone viral thanks to their incredible recreations of famous movie scenes filmed during lockdowns.

Maddie Presser, aged four, and her brother Barton, nearly two, showed off their A-List acting in recreations of famous scenes from Titanic, Jurassic Park, the Lion King, The Shining and more.

Parents Dan and Beth Presser, from Suffield, Connecticut, came up with the creative way to keep their kids amused around March and April during the height of the pandemic in the area.

Dan, 37, said, he and Beth, 35, noticed Maddie dressing up in one of her costumes and acting out a scene from the Lion King over and over again, giving the couple the idea.

Beth filmed Maddie’s recreation of the scene – where Scar lets Mufasa go and says “Long Live The King” – and then downloaded an editing app to add the likes of sound effects.

Beth filmed Maddie’s recreation of the scene – where Scar lets Mufasa go and says “Long Live The King” – and then downloaded an editing app to add the likes of sound effects.

The couple shared their work with family and friends across the country with many people responding to say the video had cheered them up during a difficult time.

After the success of the Lion King scene, Dan and Beth started looking through their costume and prop collection for objects that would allow them to recreate more scenes.

The kids loved it – and in the months since, the Pressers have recreated more than 35 famous movie scenes, which they have posted on their YouTube channel, Quarantine 2020 Productions.

As the popularity of their videos grew, the family decided to use their platform to raise money for feed people in need across America.

Dan set up a fundraising campaign for Feeding America, which, as of mid-September 2020, has raised more than $27,000.

Wanting to reward his toddlers’ incredible acting skills, Dan also came up with an adorable way to celebrate their success.

An Emmy-Award-winner himself, Dan replaced the name plates on his trophies to convert them to Best Actor and Best Actress accolades for Maddie and Barton.

He said: “The first one we did was Lion King because it is one of Maddie’s favorite and she’s recreating that whether the camera are rolling or not.

“We sent it to our families and then immediately called us to tell us how much they loved them and it brought them some much needed joy to 2020.

“I suffered from a mystery disease in the fall and was in and out of hospitals until January so missed out on the likes of my son’s first steps, and now I am getting that time back in tenfold.

“I am just really amazed how generous people have been throughout this whole thing – we had donations from across the world for Feeding America.

“We think our kids are really cute and Maddie is a great actress, but everyone thinks their kids are great, so it was nice to see strangers say such complimentary things about them.

“It’s not easy to get positive responses in the comments section of the internet but people seem to really enjoy them.

“I honestly didn’t even know Maddie a good little actress at first because the only person she was around was her infant brother and he couldn’t talk. “Once she was with kids her own age, I realized she may actually be pretty good at this stuff.”