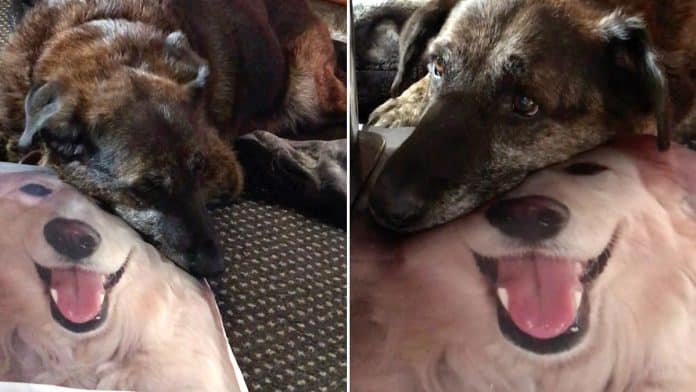 Spencer and Rocky were inseparable for ten years, but after Rocky passed away from cancer, Spencer was inconsolable.

The pair had spent every day and night with each other, eating from the same bowl, playing together and sleeping in the same bed.

So when owner Beth Fisher spotted Spencer looking sad, she decided to have a pillow made up with a picture of Rocky on the front.

Ever since, devoted Spencer loves resting his face on the pillow, recognizing his pal.

Beth, from Ayr, Scotland, said: “During a visit to the vet to pinpoint an issue Rocky had developed they spotted a large cancerous tumor.

“He had to be put down that day.

“It was hard to process Rocky’s sudden death, but we can’t imagine how hard it must be for Spencer to have lost his friend.”

Ever since Rocky’s death, Spencer would search the house trying to find Rocky.

But when he started crying, it left the family heartbroken.

So Beth ordered a pillow with the picture printed on the front.

Video filmed by Beth across multiple different days shows Spencer resting his paw on his pal’s picture, as well as nuzzling up to his friend and sleeping next to the pillow.

Beth added: “We hope Spencer will be comforted by his new pillow and all the love we show him everyday.”