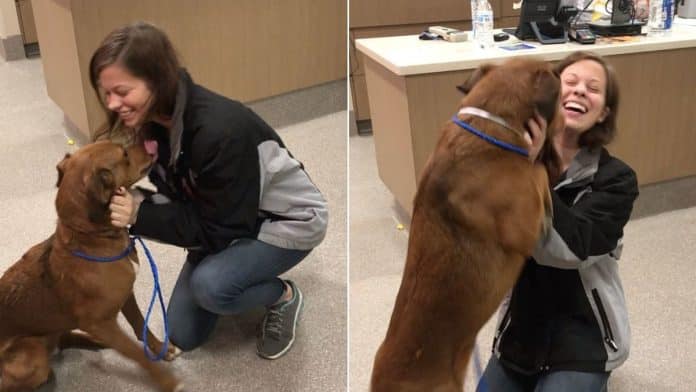 An excitable pooch has been reunited with her owner after being missing for more than two years.

Delighted Emmy Lou, a five-year-old Heeler-Collie-cross, bounced up and down with delight before pouncing on her owner, Rebecca Bien, 27, a Louisville Metro Animal Shelter.

The pair had been apart since September of 2017 – but all this might not have been possible if it were not for Facebook.

Emmy Lou went missing during a storm in the Louisville area, and after searching high a low, Rebecca, her friends and family had no like in finding the beloved pooch.

Initially Rebecca was buoyed by the fact that her friend had discovered her dog, also lost in a storm, after a couple of weeks.

But as the years rolled on, Rebecca had come to accept that her “baby” was not coming home.

After initial campaigns with fliers and Craigslist did not prevail, Rebecca set up a Facebook page, “Help Find Emmy Lou Harris (The Dog),” which eventually swelled to around 1,000 members.

Those most active became known to her as “Emmy Angels”, who would meet up and search for Emmy across the area, some driving, some walking.

After a sighting had come in around Christmas time, one of Emmys Angels decided to check the local animal shelter listings to see if a dog matching Emmy on the street had actually been found.

There, she found an image of a similar dog on January 22 and sent it Rebecca, who immediately recognized Emmy.

The person who had found Emmy said that she was on the same street the dog had lived with Rebecca for more than two years.

When the pair were finally reunited on January 24, the joy was there for all to see.

Rebecca, who now lives in Franklin, Kentucky, said: “I hope this story inspires hope to everyone missing their best friend tonight.

“If I may give my best advice, for the finders of lost animals, I urge you strongly to please take the animals to a vet or a shelter to be scanned for a chip.

“They will also give time for the owners to contact them in search for their baby.

“To those who have lost their animals, be strong – social media is your best friend.

“Reach out to other animal lovers who will sympathize and actively help you search.

“And do not be fooled by false ransom notes – people can be cold in the face of sorrow.”