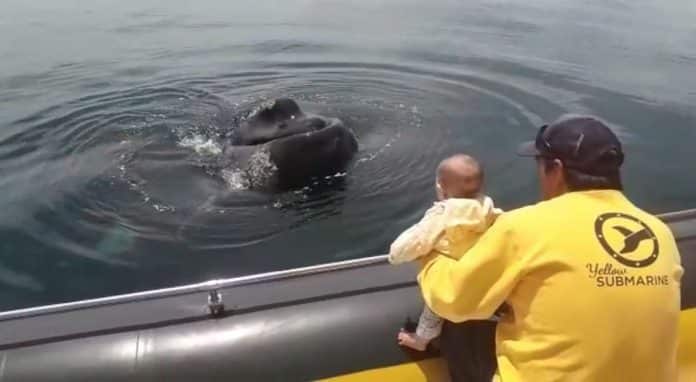 This is the adorable moment a baby played a game of peek-a-boo with a whale.

The cute interaction was caught on camera on board a whale watching boat in Golfo Nuevo, Patagonia, Argentina.

Dad Alberto Alcantara works for whale watching company Yellow Submarine S.A –www.southernspirit.com.ar – and took his daughter Azul out on a trip as part of a staff day.

And as the video shows this southern right whale was very happy little Azul had made the journey out on the waves.

The whale appears to bob up and down in the water playing peek-a-boo much to the delight of six-month-old Azul who giggles with surprise.

-Scroll down to see amazing video below-

Yellow Submarine owner Julitte Decré said it was actually not unusual for whales to be attracted to babies on the boat or in their specially built submersible.

She said: “With a baby so little it’s not so common to have them on the boat, but we are in summertime and it was a very sunny day.

“It was one of the last whales in the gulf that day, it’s where they have their babies every year, and this is the end of whale watch season.

“It was kind of good luck perhaps from the whale to us to say goodbye for the season to this baby.

“Whales we find do have a special connection with babies, we also have a submarine for whale watching and every time we have babies on board the whales are coming more at the windows of the submarine.

“We think that they have a special bond, perhaps to the sounds the baby makes and certain frequencies. So, when we have a baby crying on board, I always say let it cry because the whales will come.

“From a scientific point of view (I am not scientist) we cannot say why the whales are attracted to the noise of the baby, but it is a wonderful thing.”