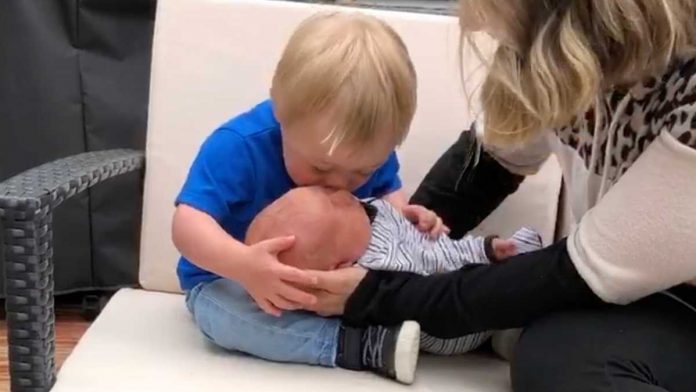 A boy with Down syndrome could not hide his delight as he got to hold his newborn brother in his arms for the first time.

Adorable two-year-old Erik Blomstrann was overjoyed to meet his first sibling, Bo, who was born on Friday, May 22.

Erik’s mother Nicole Blomstrann, 27, shared the video – and it wasn’t long before Erik’s show of brotherly love was getting widespread praise.

Erik is non-verbal but while Nicole was pregnant with Bo, she taught her son how to sign “Baby.”

Having not seen his parents for three days while they were away at hospital, Erik was overjoyed on their return home to Wethersfield, Connecticut.

Then, when Bo was brought into the room by Nicole, the youngster began to sign “Baby, please!” frantically.

In the video, shot by Erik’s father – also called Erik, 40 – the toddler can be seen occasionally giving Bo a loving lick on his forehead, which Nicole said is her son’s variation on a kiss.

Nicole said of the May 25 show of brotherly love: “I think more than anything we want people to see how much joy individuals with Down syndrome add to this world.

“They just give love so effortlessly without having to be taught or reminded to be kind.

“We say Erik is sunshine because his light is just that bright and strong.

“He has shown us so much kindness exists in this world and the Down syndrome community is simply inspiring to be a part of.

“We want to share that sunshine with as many people as possible, especially when the world truly needs it right now.”