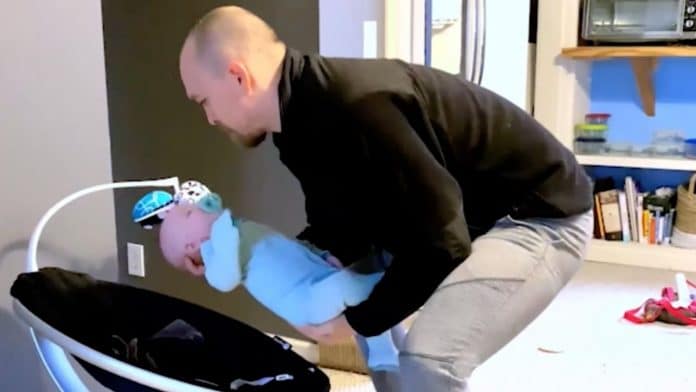 A relieved dad broke into a celebratory twerk as he managed to successfully place his sleeping baby in his rocker without waking him.

In the hilarious video, Dylan Bass, 28, holds baby Parker out in front of him, slowly creeping across the floor as he approaches his child’s automatic rocker, which is already on.

Dylan, from Nashville, Tennessee, then manages to place 15-week-old Parker into the rocker before turning around to sneak away.

Walking lightly on his feet, Dylan looked toward the camera, putting his finger to his lips before breaking into a hilarious victory twerk to mark his achievement.

The family revealed they had previously had trouble putting Parker to sleep, and so Dylan felt rather accomplished when he managed to place his sleeping baby quietly in the rocker.

Dylan’s wife captured the moment on his phone and after Dylan shared the clip on his TikTok account it quickly went viral racking up more than 12m views.

He said: “The comments have been really funny – I like to be silly so it was nice everyone found my victory dance humorous, especially the parents who completely understand this feeling.

“Being a parent can be difficult, especially when your baby is upset, or you are low on sleep.

“But celebrating the small things is important and still having fun is important because your little one is only little for so long and this season is just that, a season.”