Home Animals Man On Business Trip Receives Intruder Alert – Only To Discover It... 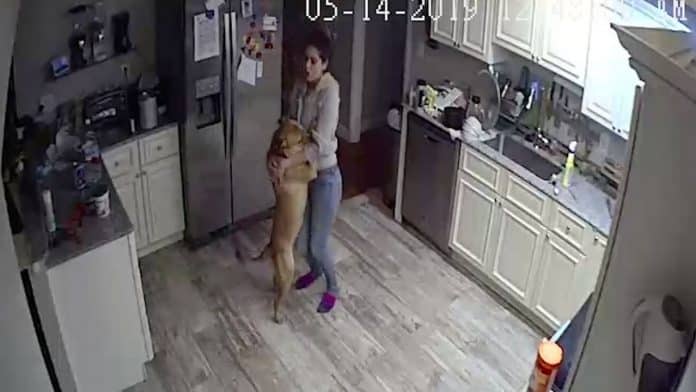 A man away on business received an alert to his phone saying there was an intruder in his home – only to discover video of his girlfriend hilariously dancing with the dog in their kitchen.

The cameras in Jose Perez Brunet’s home, in East Hartford, Connecticut, are armed while he is away, and an alert is sent if any human activity is detected, sending the footage to his phone.

While away on business in Columbus, Georgia, Jose was settling down for bed, only to receive an alert, which caused him to check out the video.

There, Jose, 33, saw girlfriend Keysla Mora, 26, who works evenings, dancing with his Labrador-chowchow-cross, the dog’s paws around her waist as they moved around the kitchen in unison.

Jose couldn’t believe his eyes, and so kept the recording of Keysla and dog Nina for others to see.

The couple found Nina on a Craigslist ad and have said she’s the princess of the house, demanding attention, like dances, in a nice way.

Jose posted the video online which has since blown up.

Speaking of the moment, which happened on May 14, he said: “Since it was the middle of the night, I got worried and right away looked at the clip sent by the camera.

“I felt pretty good knowing everything was well at home and they were having a good time.

“I got a big smile, saved the clip and went to sleep knowing everything was okay.”