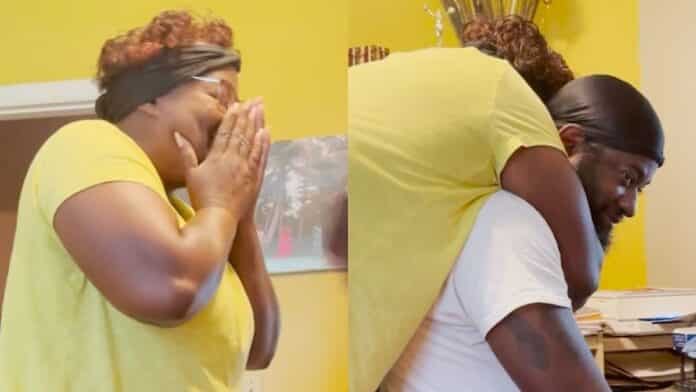 A son who is deaf gave his mom the ultimate thank-you gift for years of love and support by surprising her and paying off her mortgage.

Malcolm Jenkins’ beautiful gesture caused mom Claudia Smith, 59, to scream in shock before dancing up and down on the spot and crying happy tears in her Columbia, South Carolina, home.

According to Malcolm’s sister, Natasha, 37, her brother had wanted to pay off Claudia’s mortgage for some time, secretly checking the balance over the past few months.

Then, when he came to town recently, Malcolm told his sister of the plan, and he initially wanted to head to the bank and cut his mom a check.

To help build up an element of suspense, though, Natasha suggested that Malcolm make the gesture over the phone, with his sister offering to make the call for him at their mother’s home.

On August 4, with the family gathered, Claudia was told initially that Malcolm, 39, was looking to make a smaller, one-time payment as a gift to her – meaning she was totally unaware of what was to come.

With the representative on speakerphone, Natasha then talked through the likes of payment details before the person on the other end of the line asked if she was going to use such information for the next month’s payment.

That was when Natasha said the words that took her mom’s breathe away: “I actually want to use it to pay off the account.”

As Claudia heard those words, she let out a “What?!” before dancing up and down on the spot and heading to hug Malcolm – who lost his hearing at three years old – as he sat nearby.

She then cried happy tears as Natasha completed the process.

READ MORE: Loving Mother Brought to Tears as She’s Surprised With Children’s Book Based on Her Parenting

Claudia’s other daughter, also called Claudia, 40, captured the moment on video before later sharing it on social media.

Speaking of the moment, Natasha said: “My brother lost his hearing at three years old, but that never stopped him from living and excelling in life.

“He saved his money from working to do something like this for our mother.

“He is a great example of a son, father, big brother, uncle, and man.

“My mom made sure as we all grew up that there was nothing we could not accomplish despite any odds that may have been stacked up against us.

“He is a true example of doing anything you put your mind to.

“The moment her mortgage was paid off was priceless!

“We can never repay her for all of the sacrifices she has made for us over the years – there is no monetary amount large enough to do that.

“To this day she is a great support to all of us with anything we want to do, we are all adults but she is still as present as she was when we were growing up.

“We love her wholeheartedly and this was just a small way to show her that.”