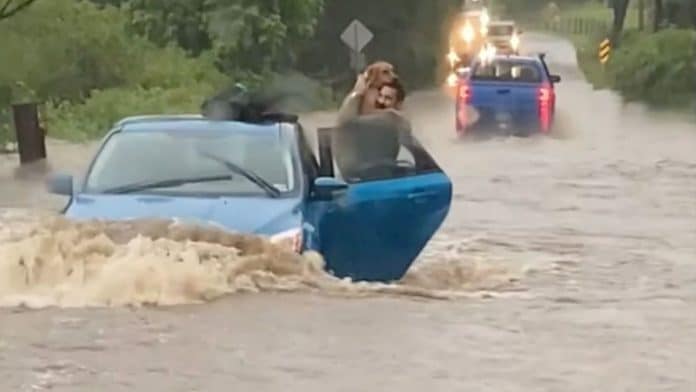 A couple driving through churning flood waters were shocked to discover a man and his dog trapped in the midst of the rising water, stopping to help them into their truck to safety.

In the selfless moment, caught on video, Stephen Maguire and his wife Sharon drive toward the flooded road in Delaware County, Pennsylvania, on August 7.

With the deep waters raging across the road, Stephen suddenly noticed a blue car trapped in the water – and as he approached, a dog became visible.

The driver then realized that there was, in fact, a man climbing out of the car, too, holding the dog above his head as a way to protect it.

With the car unable to move and the man and dog having nowhere to go, Stephen and Sharon opted to drive their pickup truck into the water, encouraging the man and his dog to jump in.

Since the couple’s own dogs Mia and Spencer were on the back seats, the unnamed man and his dog hopped into the flatbed of the pickup.

With the man and his dog in the back, the couple then drove him to safety – though they never got his name.

“We weren’t sure if we should go through the water, but after seeing the truck in front of me make it through we decided to give it a try.

“It was a little scary, but after seeing the dog we didn’t really think of anything else other than helping that guy with his dog.”